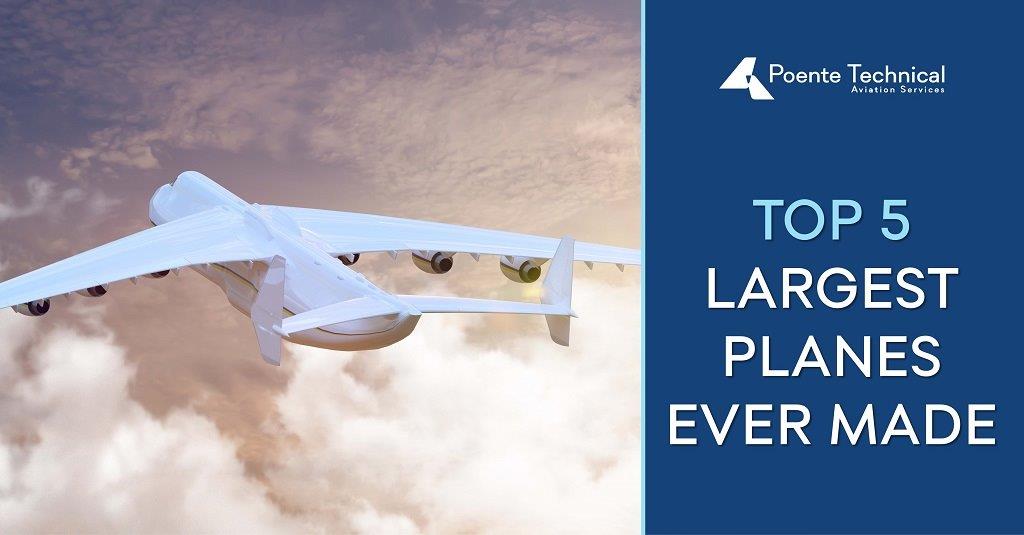 There are many ways to measure large aircraft. Some of the factors that are taken into consideration are length, weight, volume or wingspan.

Today we are introducing you to 5 largest planes ever made.

The A380 is a large wide-body airliner that was developed and produced by Airbus. It is the world’s largest passenger airliner and only full-length double-deck jet airliner. Airbus A380 is the largest passenger jet ever built by passenger capacity, volume, weight, and wingspan.

It offers a maximum passenger capacity (exit limit) of 853, but airlines operate it with a typical capacity of 400 to 550 seats. Such high capacity demonstrates a world-class feat of engineering.

The latest Boeing 747-8 is the largest version offered. It’s just over three meters longer than the A380, but it has a lower maximum capacity of 605. This is the maximum exit limit, the typical capacity is around 450 seats. Boeing 747-8 has a much shorter wingspan than the Superjumbo (68.4 meters compared to 79.95 meters). This is actually a benefit, as it increases the number of airports at which it can operate.

Boeing 747-8 entered into service in early 1970 and since then it has been the undisputed “Queen of the Skies”.

Until the A380, the 747 was the largest passenger aircraft flying. It was developed in collaboration with Pan American World Airways (Pan Am). Originally, this aircraft was planned with a full-length upper deck, but this could not be made to work with safety requirements.

We still have to wait a while to see 777X in airline use, but as test aircraft are now flying, we are including Boeing’s upcoming 777-9 on the list of the 5 largest planes ever made. The largest variant, the 777-9, will be the longest passenger aircraft ever launched, at just over 76 meters. It will offer a typical capacity of up to 426.

The 777X is a twin-engine aircraft and the new GE9X engines are the largest and most powerful commercial engines ever built.

The largest Antonov aircraft operational is no longer the Antonov An-225 Mriya, as it has been destroyed in the bombing of the Gostomel Airport on the first day of the war between Russia and Ukraine. The An-225 was the heaviest aircraft ever built, with a maximum takeoff weight of 710 tons.

The An-124 is smaller than the An-225, but it’s one of the largest commercially developed freighters. It was launched in 1982, and 55 aircraft have been built. An-124 was the heaviest commercially produced aircraft until the 747-8 was introduced. With a payload capacity of 165 tons, the An-124 can haul even more than the Lockheed C-5 Galaxy, though its range isn’t as long.

The C-5 Galaxy is a military transporter aircraft built by US manufacturer Lockheed and entered service in 1970.

At just over 75 meters long, it is bigger than both the Airbus A380 and the Antonov An-124. Lockheed C-5 Galaxy can carry a payload of 135 tons. Without cargo, the C-5 can fly up to 7,000 miles without refueling, making it the longest-range military airlifter in the world. It remains in active service with the US Air Force.