The largest aircraft hangars in the world 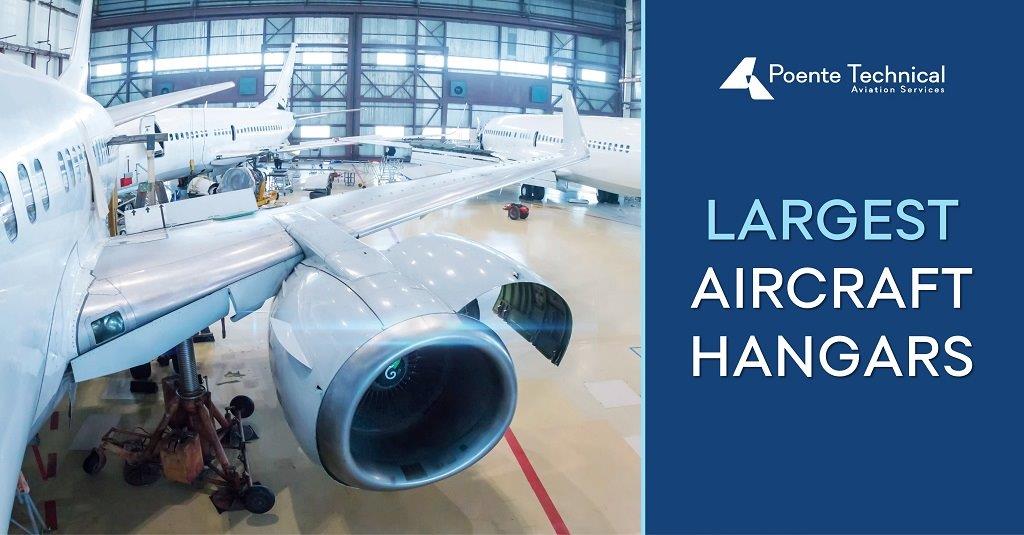 A hangar is a building or structure designed to hold aircraft. Hangars are built of metal, wood, or concrete. They are used for protection from the weather, and direct sunlight and for maintenance, repair, manufacture, assembly, and storage of aircraft.

Strength and staying power are crucial in keeping planes safe and shielded between flights. It is crucial to house planes in sturdy, weather-resistant hangars to help maintain their value and help keep them in good shape and working order for as long as possible.

Largest aircraft hangars in the world

Here are some of the largest aircraft hangars in the world.

Hangar 7 was built in the 1990s in Salzburg, Austria by Red Bull founder Dietrich Mateschitz. The building is airfoil shaped, constructed of 1,200 tons of steel and 75,000 square feet of the glass surface. It houses rare and prized planes owned by the Flying Bulls – a group of airplane enthusiasts.

This hangar is also home to helicopters and Formula One racing cars. In Hangar 7 you can find Restaurant Ikarus, a Michelin-rated high-class restaurant featuring a rotation of guest chefs.

The iconic Spruce Goose Dome is located in Long Beach, California. It housed Hughes Aircraft’s H-4 Hercules, affectionately nicknamed the “Spruce Goose” due to its wooden construction. The H-4 has the largest wingspan of any aircraft ever built, but it was never actually deployed as it wasn’t completed until after World War II, for which it was developed. The 75,000-square-foot dome is no longer used to house aircraft and is now used as an event space for The Queen Mary Hotel.

The 163,344 square-foot Lockheed Air Terminal hangar has been in use since World War II, when netting camouflaged the entire airport to make it look like a rural area to prevent enemy forces from realizing that the military manufactured and stored aircraft there. Formerly on-site at the Burbank Airport, the complex is now known as Bob Hope Airport.

Hangar B is located at a Naval Air Station in the Oregon city of Tillamook. It was built in 1942 by the U.S. Navy. This 317,000-square-foot building is still one of the world’s largest free-span wooden structures and is currently part of the Tillamook Air Museum.

Hangar One is one of the world’s largest freestanding structures, covering 8 acres (3.2 ha) at Moffett Field near Mountain View, California, in the San Francisco Bay Area. It’s one of the most recognizable landmarks of California’s Silicon Valley. Hangar One formerly housed an airship called the U.S.S. Macon. It opened in 1933. It has floor space measuring nearly 350,000 square feet. Hangar One is now leased by Google and it even has its own Twitter account.

Built in 1929 in Akron, Ohio, the Goodyear Airdock covers 364,000 square feet and was originally designed for the construction and storage of aerostats such as the infamous Goodyear Blimp. Lockheed Martin, an American aerospace and defense company, and also a former Goodyear Zeppelin facility, acquired the airdock in 1997, shortly after Lockheed Corporation merged with Martin Marietta in 1995.

Hangar 375, affectionately known as “Big Texas,” on San Antonio’s Kelly Air Force Base is recognized as the largest active free-standing aircraft hangar in the world at 600,00 square-feet. As an actively used hangar in a US military installation, not much is known to the general public aside from its vast size.

Located in Brandenburg Germany, the Aerium Hangar was built in the mid 1990s to house the production and storage of the enormous CargoLifter airship, the CL 160. However, due to a multitude of factors, the CL 160 was never actually built. The 851,500 square-foot marvel is now a large resort and waterpark called Tropical Islands, which boasts the “World’s Largest Indoor Rainforest.” Although technically no longer an aircraft hangar, the Aerium still remains the world’s largest free-standing hall.

Up the Pacific Coast, in Everett, Washington, is the Boeing Everett Factory. This is actually a production plant more than it is an aircraft hangar, although the Everett Factory does store aircraft – newly finished, Boeing planes. You can tour this tremendously massive structure as part of a tour of the Boeing factory. Guides will educate you about some great facts during the tour which makes the experience much better. Interestingly enough, the structure has 4.3 million square feet inside of it, making it the planet’s largest free-standing structure.

They say everything is bigger in Texas, and the GDC Technics hangar is no exception. Located in Fort Worth, Texas, at the Alliance Airport, the 840,000-square feet, this hangar was built in 1992 and cost over $90 million dollars to complete. The hangar was first occupied by American Airlines as a maintenance facility for the airline’s fleet and was considered at the time the largest cantilever hangar in the world. In 2014, it was sold to GDC Technics, a world-renowned completion center known for VVIP aircraft interior completions on Boeing and Airbus wide-body aircraft at an undisclosed price. This massive hangar holds 6 wide bodies and 4 narrow bodies simultaneously, including a 747-400 if needed. The company provides aircraft services for Heads-of-States and individuals of ultra-high net worth including full interior completions, maintenance, refurbishments, satellite upgrades, live tv installation, surveillance, and defense counter mechanisms.