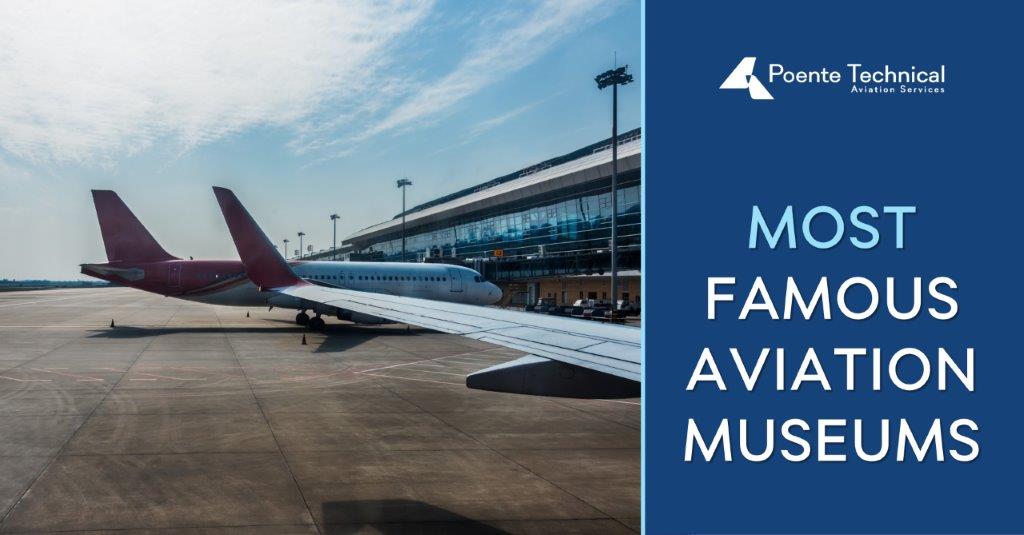 Ever since the time of the Wright brothers, flying has become one of the main and most efficient modes of transportation, both for people and goods. Aviation itself has experienced, during the time of development, consequential changes over the years. That is why aviation museums are unavoidable places when we talk about the history of flying, and that is why they are unavoidable tourist spots. In the new blog, we present some of the world’s most famous aviation museums.

When we talk about aviation museums, in the first place for sure is Smithsonian National Air and Space Museum in Washington. Known to be the world’s greatest aviation and space collection make this museum cherished by both the aviation-obsessed and superficially curious. It includes all aspects of flight, as well as relevant works of art and archival materials. Visited by approximately 7 million people every year, being the second most popular museum in the world, the Smithsonian Air and Space Museum deserves to be at the top of our list of aviation museums.

Established in 1946 as the National Air Museum, the museum can boast that the most famous exhibits are the first-ever airplane, the Wright Flyer, made by the Wright Brothers, and the Appolo 11 command module Colombia. 60,000 exhibits and a public archive of more than 1.75 million photographs and 14,000 videos detailing aviation and space are something the museum can be proud of.

Udvar-Hazy Center is an extension of the Smithsonian’s original National Air and Space Museum. The goal for this project was to accommodate a museum-quality setting for historic aviation and space artifacts and an interactive experience honoring the excitement of air and space travel. The site is located near Washington Dulles International Airport, allowing large aircraft and spacecraft to be flown directly to the museum.

Udvar-Hazy Center is displaying thousands of aviation and space artifacts, including a Lockheed SR-71 Blackbird, a Concorde, and the Space Shuttle Discovery.

Imperial War Museum Duxford is Europe’s largest air museum. Within the magnificent displays of aircraft and great presentations, together with the compelling stories of the people included in historic events, visitors can find out about the influence of aviation on the nature of war, on people’s lives. The museum is located near Duxford in Cambridgeshire, England. The museum was built on a historic airfield and it was the first branch of the Imperial War Museum to be opened to the public on a regular basis in June 1976.

In this museum, you can see Spitfires and Hurricanes, a part of the original Wright Brother plane, you can walk through Concorde, feel belittled by the size of a B-52 and stand in awe of Europe’s only SR-71 Blackbird – the fastest jet ever built. In keeping with the site’s history many of Duxford’s original buildings, such as hangars used during the Battle of Britain, are still in use.

Duxford is one of Europe’s premier aviation museum and certainly a museum to visit.

Located 38 km (24 mi) from Moscow, deep in the Russian forests, Central Air Force Museum houses the greatest collection of air-related items. The exhibits are placed in the open air, in 3 hangars, and 3 exhibition halls. The museum was opened in 1960 at the original airfield location. All aircraft are real and most of them flew to the museum themselves, intact. The museum boasts an amazing array of planes, helicopters, gliders, and other flying devices, aviation engines, and aviation arms. The Central Air Force Museum is located on the grounds of the Gagarin Air Force Academy on the site of the former Monino Airfield.

Besides airplanes, the museum features collections of missiles, bombs, fuses and ammunition, navigation instruments, pieces of radio and communication equipment, personal things of pilots, etc. Many of the aircraft were produced in limited numbers and can only be found in the Monino Aviation Museum.

Monino has a special treat for aviation enthusiasts. especially military aviation. A great collection of MiG jets fighters. There are four MiG-21’s on display at Monino. MiG-21 is the most produced Jet Fighter in the world and was deployed by more than 50 countries. The other treat is Sukhoi, which has produced a range of excellent fighters since the 1950s of which 6 are still active in the Russian Air Force and many are on display at Monino.

For more interesting stories from the world of aviation visit our blog.